DISCLAIMER
This is a personal blog. The views expressed on these pages are mine. It is solely my opinion. I am not an expert and am not responsible for what you do with my advice and opinions.
All data and information provided on this site is for informational purposes only. I make no representations as to accuracy, completeness, currentness, suitability, or validity of any information on this site and will not be liable for any errors, omissions, or delays in this information or any losses, injuries, costs incurred,or damages arising from its display or use.
The information in this weblog is provided “AS IS” with no warranties, and confers no rights.

opening of my camper studio for the holidays,, saturdays only starting nov 2 2013 till christmas

i know its to early for some of you to think about christmas,, but for me ,, its been on my mind all year,, carving  santas, and ornaments,  etc,,,  so i decided to open up  my camper studio for 8 weeks starting nov 2, 2013 from 10 am to 4pm  and will add some evenings a week before christmas,, here is the flyer i put together about this event,, classes will come in jan,,  will post them soon ....
i have no idea how this will go ,, but last year sats were a good day,, esp 4 weeks before christmas,,  i had a few people all ready stop by during the summer asking about it,,  so i hope it goes well,, wait and see, one never knows ,,, lol   but i will sure give it a try,, :) 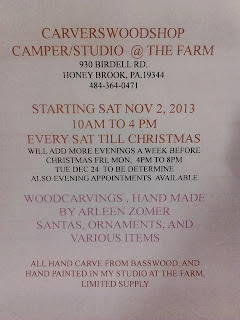 Posted by carverswoodshop at 10:22 PM No comments: Links to this post 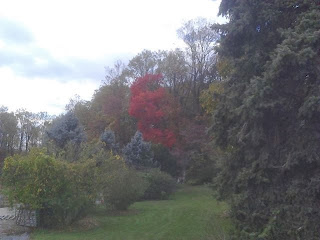 Posted by carverswoodshop at 10:06 PM No comments: Links to this post

some time for mom ,, at september farm cheese and shady maple shopping 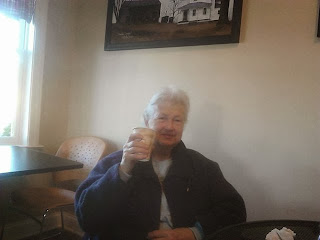 we have a new store in our town of honey brook,,, september farm cheese , they make their own cheese and serve lunch,, cheese sandwich and coffee is the best,, mom and i enjoy stopping for lunch after our shopping at shady maple,,  yummy,,
Posted by carverswoodshop at 10:06 PM No comments: Links to this post

mich trip off to frankenmuth show, 2013

hi folks i attend this show for the past four years,, its a one day show, which is great for me,, i was able to take some friend with me for the day,, and enjoy a day out , along with a carving show,, i was limited what i could bring along,, nothing like what i do for our lancaster show in march,, but enough to hopefully spark some interest in stopping at my table,,  during this time i often meet folks that watch my instructional videos on youtube,, its becoming common place no matter which show i attend,,i would say half of the folks stopping by had tune in to my youtube channel,, its always great to meet folks that enjoy and are learning from my videos,,,  its always  amazes me ,, how many are learning how to carve from the videos,, its very humbling to me,,  i am so grateful that it been a source of joy to many,
at the show i was able to put in three pieces to compete,  and i won one first place and two second place,, photos will be below,,,   thanks to all that work on this show,,  i know hours of prep work goes into making a show like this happen,, not only from the club but from the vendors that come to set up,, 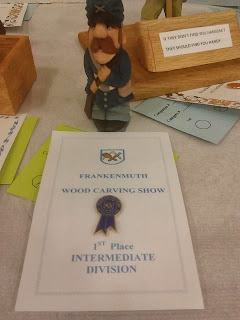 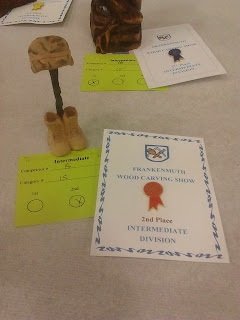 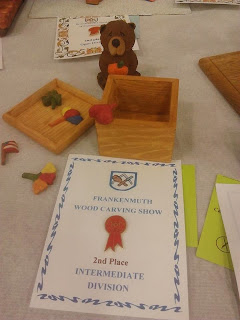 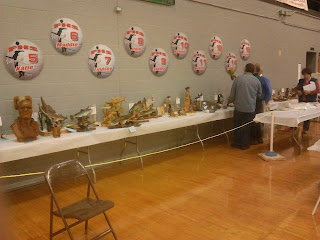 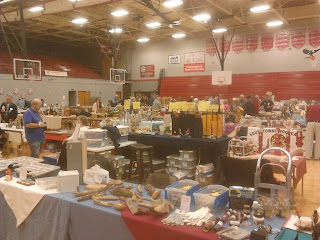 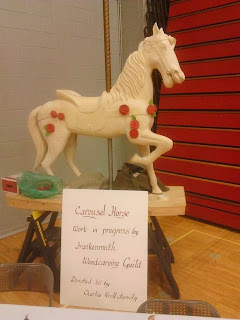 hi folks every year i attend the apple fest here nearby , at joanna's furnace near morgantown, pa,,  it was a wet mess to start, and a two day event,,  normally its only one day,, i was not really up to it,, the amount of work to put a show like this takes days to prep for,,  this year i decided to use my big tent with sides since they were calling for more rain,,, i went out to secure a spot on friday,  it was pouring,,  and puddles everywhere,,  i choose a spot , then came back later with the tent when the rain would ease up,, they only had about half the vendors this year due to the weather,, but it turned out to be a great weekend for me,,  setting up in the dark,, i had a light 26 watt bulb that was = to 100 watts,  in a battery power pack that gave me enough light till the sun came up,,  i thought it was cool how it looked at night,, 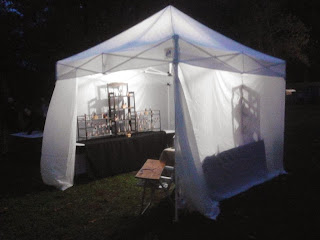 below was my view from my table 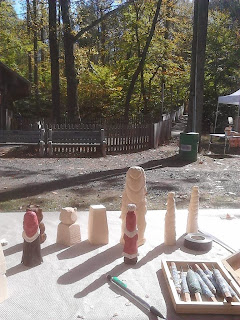 below i had this set up sat, where they had to walk in,, sat was kinda slow due to the possible rain that day 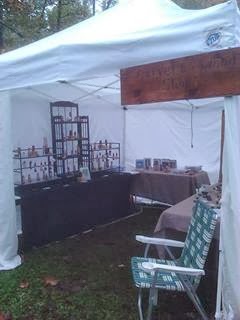 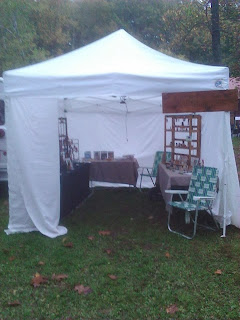 below i decided to change things up a bit,, and found that opening the sides and puting the tables around the outside for the tent so folks could walk around was much better in sales, about 3 times more in sales that day,,  i notice later that the table clothes were not even,, lol,, folks do not want to enter a tent as the one above,,  the one below was a much better settup,, plus i had a place to carve,, that folks could easily see,
i sold about 1/4 of my inventory,, it was a great weekend,,,  as you can see there were not many vendors, otherwise i would have had folks around me,,,  lol  later i did have someone next to me later in the weekend , 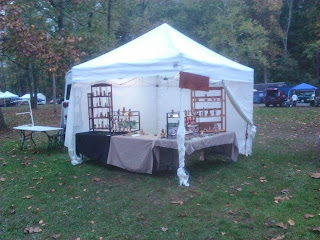 Posted by carverswoodshop at 9:45 PM No comments: Links to this post

sorry about the slow posts ,,

hi folks i will try to update you with some photos and whats been happening,,  i been so busy this month and for many reasons. i post mostly on facebook these days of things that are happening, but i also know many of you do not use facebook,, so here are a few things going on,,  i went to michigan last week for a week, and was able to attend the frankenmuth show and also the apple fest earlier this month, ,  then getting ready to open my camper studio  on saturdays only this coming starting this weekend nov 2 2013  ,,  also like many americans dealing with the healthcare issues,, i am among those that will have to look for new insurance,,  which has taken some of my time as well, needless to say time has been short. so i will post about each of these events,,,, with some photos, soon, thanks for dropping by,, keep carvings , arleen
Posted by carverswoodshop at 9:26 PM No comments: Links to this post 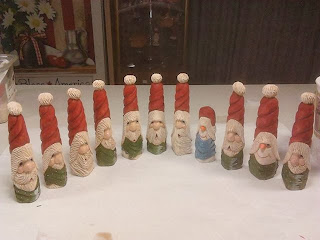 Posted by carverswoodshop at 10:48 PM No comments: Links to this post

painting some of my spiral santa ornaments

some with a scarf , and windy santa  ornaments ,, will finish painting tomorrow 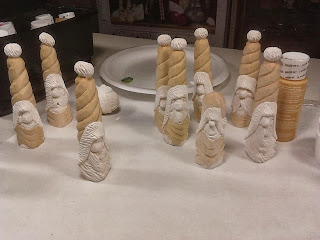 Posted by carverswoodshop at 12:30 AM No comments: Links to this post

this coming weekend , oct 12 and 13th,, 2013  i will be at the haycreek apple festival,,  located above morgantown pa, at joanna furnance,,   also plan to be at the frankenmuth woodcarving show, frankenmuth mich,  on oct 20th,, sunday,, this is a one day show,, i will be limited what i can bring along,, but i will be there,,
also i will open my camper/ studio on sats beginning nov 2 from 10am to 4pm,,  i was open limited hours last year and decided to make this a yearly event ,,  i will be working on carvingws, folks are welcome to come and ck out my studio , and all my carvings for sale will be on display and dvds, along with display of all the projects that were done on youtube,,, 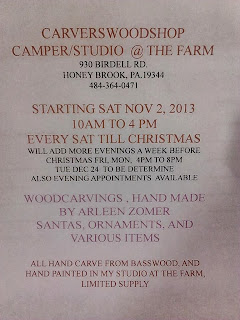 ,,  below is the flyer i will give out at haycreek this weekend,,  i didnt do as many shows this year,, i was able to pick the ones  did well for me in the past,,  so this year i only did two woodcarving show,, lancaster and frankenmuth, and the haycreek apple fest,, and then open my shop up before christmas,,  i had some local folks all ready come and purchase christmas items,  appointment can be made for any other times, just call,,  thanks keep carving
Posted by carverswoodshop at 12:14 AM No comments: Links to this post

I'm giving away bears to someone that does not celebrate holidays because of their religious beliefs. so I decided to make a seasonal bear with the spring summer winter and fall. I just had to add to a little tree with the snow and the sunflower for the summer 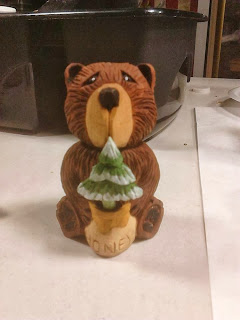 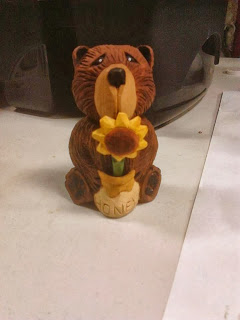 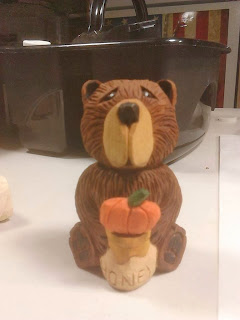 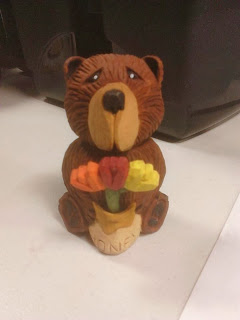 Posted by carverswoodshop at 10:47 PM No comments: Links to this post